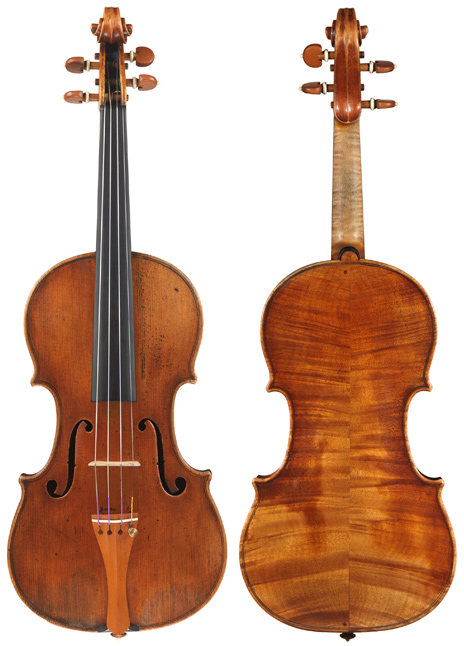 The violins of Giovanni Battista Guadagnini are some of the most highly coveted by both leading artists and collectors. Violinists are extremely fortunate that he had such a prolific working life which spanned close to five decades.

From Guadagnini’s considerable body of work, crafted in the five cities where he lived over the course of his life, the instruments made in Turin during his final years are considered some of his most desirable.

The “Bryant” is one of the most remarkable violins by this maker that we have seen.

The legendary stringed instrument collector Count Cozio di Salabue arrived in Turin in 1771 when he was 16 and just beginning his pursuit of that passion, the same year that Guadagnini moved to the city. Thanks to Duane Rosengard’s landmark publication Giovanni Battista Guadagnini: The life and achievement of a master maker of violins, we know that in 1773, the Count entered into an agreement with Guadagnini to purchase everything he made and supply the wood—an arrangement that lasted until 1777. During this period, from 1773-74, Guadagnini helped the Count make one of his most significant acquisitions: the purchase of all of Stradivari’s remaining violins and workshop contents from his son Paolo. Quite a coup for the young collector and an extraordinary opportunity for Guadagnini. Cozio had the maker modernize most of the violins, which gave him time for the detailed study of some of Stradivari’s greatest work, including the celebrated “Messiah” of 1716.

Guadagnini’s time under exclusive contract to Count Cozio was a highly prolific period in which, according to the Count’s records, the maker produced more than fifty violins, two violas, and three cellos in just over forty months. It is within this period that he crafts this masterpiece in 1775, the “Bryant.”

The most exceptional examples by Guadagnini not only possess full concerto power for concertmasters and soloists, but also Cremonese color. The “Bryant” is one of the rare examples that is strong enough in its lower register for Brahms, yet has the beautiful, silky quality in its top register for Mozart. What makes the “Bryant” one of the most remarkable Guadagninis our firm has handled is that it represents a confluence of his two best characteristics: the flatter, broader arching from his Turin period with the gorgeous varnish of his Milan period. Stunning in appearance, we know of only five other violins from this brief window of time that are made with the highly-attractive and irregularly-figured maple used for the back.

The “Bryant” has had only two owners since 1912. Bein & Fushi last sold the violin more than thirty years ago to the current owner who is one of our firm’s dearest clients and most discerning collectors. Prior to that it was owned by the instrument’s namesake, violinist Florence Bryant, and was held by her family for seven decades. The “Bryant” is illustrated in Die Geigen und Lautenmacher vom Mittelalter bis zur Gegenwart by Willibald Leo von Lütgendor and , Hamma & Co., Stuttgart, c. 1908 as well as Bein & Fushi’s Fall 1981 Magazine.

It is our privilege to offer the “Bryant” once again, and we look forward to placing this rare and magnificent violin with its next caretaker.