Go confidently in the direction of your dreams,
live the life you have imagined.
Henry David Thoreau

Born and raised in the Chicago area, Geoffrey Fushi’s lifelong love of music and passion for the violin began at age seven when he started his violin studies. He later was a student of Herbert Butler, a protégé of the celebrated 19th-century virtuoso Joseph Joachim. While in high school, Fushi was introduced to the study of fine instruments and bows by the collector Dr. David Young. He continued to pursue his passion by joining the firm of William Lewis & Son, then Chicago’s largest violin shop with a sizable and distinguished international clientele. There he worked closely with Harry Benson, who headed the company, and Carl Becker, the top American violin maker and restorer. With their guidance and by having the opportunity to examine the many fine instruments in the firm’s inventory, Fushi was able to devote himself to the study of the legendary old masters of violin making.

In 1976, Geoffrey Fushi teamed with the late Robert Bein to launch Bein & Fushi. They had unprecedented success when in just ten years the company reached the pinnacle of achievement in a field where many of the most prominent firms had been in existence for over a century. Both men became major forces in the classical music world. Geoffrey Fushi was acknowledged as one of the world’s foremost experts on the tonal qualities of rare antique Italian instruments and Mr. Bein on their authentication.

Geoffrey Fushi was a master at matching musician and instrument. He worked with many of the leading artists of our time, including Ruggiero Ricci, Yo-Yo Ma, Itzhak Perlman, Gidon Kremer, Lynn Harrell, Joshua Bell, Gil Shaham, Anne-Sophie Mutter, Isaac Stern, Yehudi Menuhin, Nigel Kennedy, and Ko Iwasaki. After over four decades, Bein & Fushi is still the leader in innovation, expertise, and excellence in the field offering a wide-ranging inventory from magnificent rare Italian instruments to those made by today’s top modern instrument and bow makers. The company serves musicians at all levels, from students to the most accomplished orchestra and chamber ensemble members, concertmasters, and soloists around the world.

Geoffrey Fushi’s desire to foster the careers of outstanding young artists led to the founding of The Stradivari Society with Mary Galvin in 1985. The Society has helped some of today’s leading musicians advance their careers by making it possible for them to play great antique Italian instruments thanks to generous patrons who place those instruments with the organization. Some of the most accomplished artists of our time have benefited from this unique program including Midori, Maxim Vengerov, Sarah Chang, Joshua Bell, Leila Josefowicz, Vadim Gluzman, and Vadim Repin, to name just a few. 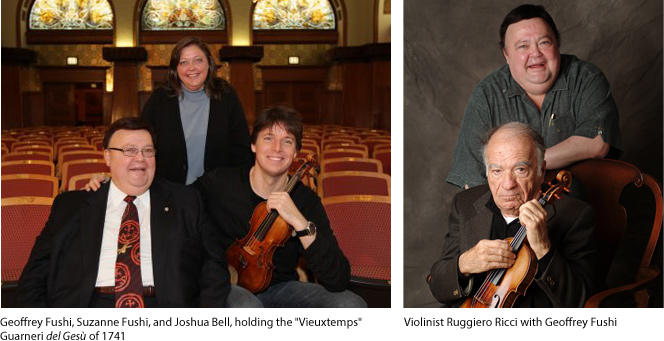 Through his work with the Society, Fushi was the first to bring great Italian instruments to the most promising young artists in China: with violinists Chuanyun Li, Chen Xi, Yang Liu, Xiang Gao, Yunzhi Liu, and Siqing Lu having had the opportunity to become Society recipients in recent years. In the course of several tours to the People’s Republic of China, Geoff exposed an eager public to the wonders of the great master makers for the first time through many performances by Chinese recipients and his own captivating lectures and exhibitions. All were met with packed houses, broad media coverage, and fans lining up to get Fushi’s autograph.

He also provided many recipients with performance opportunities in the major music centers of the world by producing tours, concerts, and recitals showcasing Society artists in Paris, London, Montreal, Beijing, Shenzhen, Shanghai, Moscow, New York, Washington D.C. at the Supreme Court and Library of Congress, and Chicago for Mayor Daley, among others. The pinnacle of accomplishment in this area was reached in 2002 in Beijing at Zhong Nan Hai, the Chinese “White House,” when Fushi presented a concert featuring former Society recipient Siqing Lu with then Chairman of the People’s Republic of China Jiang Zemin and other top Chinese dignitaries in the audience.

One of the greatest highlights of Geoffrey Fushi’s career was his conceiving and bringing to life the landmark project The Miracle Makers: Stradivari, Guarneri, Oliveira, a handsomely illustrated, coffee-table book and three-CD set which compares and contrasts thirty exquisite Stradivari and Guarneri del Gesù violins played by distinguished virtuoso Elmar Oliveira. Published in 1999, The Miracle Makers remains the largest undertaking of its kind. The set received the highest praise from Fanfare: “It’s hard to imagine that the case for Stradivari and Guarneri could be more powerfully stated in words, pictures, or recorded sound—or to imagine that any future book about violins will not be judged by this epoch-defining standard.”

Fushi worked closely with the developers of the state-of-the-art Super DVD recording system in order to record as much of the classical repertoire as possible using this amazing new technology. Two critically-acclaimed projects were the result of this collaboration:

Playing My Precious Violin: The Music of Contemporary Chinese Composers

Maestro Ruggiero Ricci: The Violin Virtuoso of the Twentieth Century

Combines footage of a master class led by Ricci along with his extensive discussion of virtuoso technique. Ricci commented about the project: “Geoffrey Fushi’s production of these DVDs means my life’s work will not be lost.”

Geoffrey Fushi lived life to the fullest and achieved the highest level of success in our field. He was one of a kind in the best sense: he was devoted to his beloved family and friends and a brilliant innovator who inspired colleagues and employees and had a great vision for our firm.