Robert Bein was born near Cincinnati and grew up in a musical family. His father was a professor of music at Miami University and his mother, a professional violinist. Bein played the cello for many years. He studied with Yehuda Hanani and Aldo Parisot and was admitted to the Mannes College of Music in New York City, but realized that he would never be a great musician.

Bein inherited a modest sum upon the death of his maternal grandmother. He used the money to purchase an outstanding Dominique Peccatte cello bow and discovered that it brought a new dimension to his playing. His Peccatte bow sparked what was to become a lifelong fascination with and passion for fine stringed instruments and bows.

He began by convincing Wilbur Hansen, the dealer from whom he bought the bow, to give him a “job,” and teach him about violin expertise. There was no opening with the firm, but  Hanson saw talent and created an unpaid position for Bob. Within a week, he had made his first sale and his life was set on a new course.

He launched his career in the violin business in 1971 when he opened a small shop in Cincinnati. Bein became renowned for his photographic memory, which allowed him to identify instruments at a glance. Carl F. Becker saw his talent for recognizing the works of the master violin makers and helped him by pointing out details of their workmanship.

It was at this time that he and Geoffrey Fushi began working together. 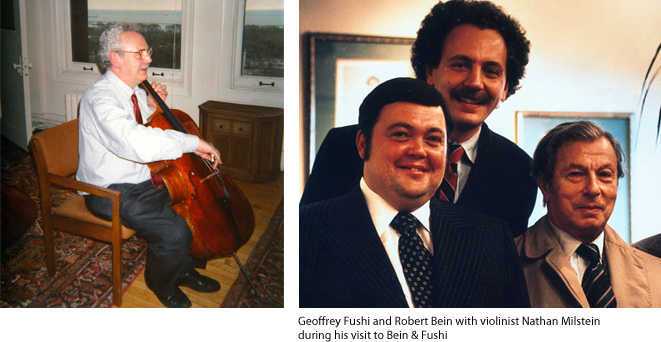 Robert Bein and the late Geoffrey Fushi opened Bein & Fushi, Inc. in 1976. Bein spent the next three decades concentrating on the identification and cataloging of fine antique musical instruments. He become one of the world’s leading authentication authorities. He compiled a vast photo archive of instruments by the greatest makers, an extraordinary resource for experts, historians, and today’s makers and part of his remarkable legacy.

His door was always open to those who shared his passion for violins. Bein empowered those around him and took great enjoyment in seeing his colleagues succeed. He loved to entertain and cook for friends and family at home.

Bein is the co-author and publisher with Geoffrey Fushi of the landmark The Miracle Makers: Stradivari, Guarneri, and Oliveira, a coffee-table book and three-CD set which compares and contrasts thirty exquisite Stradivari and Guarneri del Gesù violins played by distinguished virtuoso Elmar Oliveira. The book features the chapter, “A Brief History of Stradivari and Guarneri del Gesù,” as well as descriptions, provenance, and historical perspective on each instrument by Robert Bein and remains the largest undertaking of its kind.

Robert Bein brought his vision of a revised, expanded, and enlarged edition of the classic reference How Many Strads? Our Legacy from the Master by Ernest Doring to life with three added appendices which include many new images of Stradivari instruments not included in any other publications, a comprehensive index on Stradivari instruments illustrated in the literature with over one hundred sources referenced, an extensive bibliography, and history of The Stradivari Society. Robert Maxham of Fanfare wrote of How Many Strads?,  “Collectors have deemed Doring’s original edition worthy of bids well over $1000, but very little of that value comes from its brittle binding, yellowed paper, typography, or photography. It’s the book’s soul that matters. And Bein & Fushi have enshrined that soul in a new ‘enlarged and expanded’ edition that preserves all that was good in the original and enhances much that wasn’t. The final result is sumptuous, to say the least.”

Bein trained violin restorers and mentored young appraisers. He was a regular lecturer at the Chicago School of Violin making, the Violin Society of America, and the American Federation of Violin and Bow Makers.

Robert Bein’s life’s work was his landmark book Giuseppe Guarneri del Gesù: His Known Works. Unfinished at his death, his son Joe is proud to be taking his father’s vision of a catalog of all of the great del Gesù’s instruments, the first book to contain such a comprehensive listing, to completion. 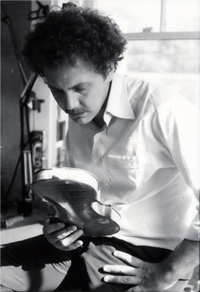