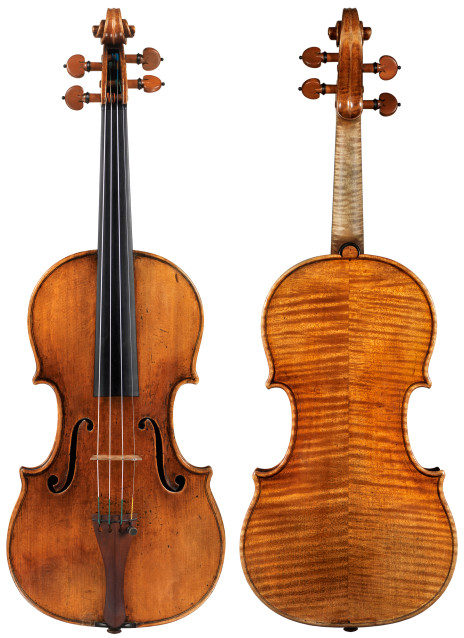 It is our great privilege to offer the “Thunis” Antonio Stradivari violin of 1728. Documented in several of the most prominent publications on Stradivari, the “Thunis” is one of the more tonally dynamic Stradivari violins our firm has encountered. The violin dates from a fascinating and transitional moment for Cremona’s glorious violin-making history.

By 1728, the octogenarian Stradivari had achieved great wealth and commercial success. Prior Cremonese dynasties including those of the Amati and Ruggeri families had come to a close and the careers of two of Stradivari’s most illustrious contemporaries, Giuseppe Guarneri del Gesù and Carlo Bergonzi, were ascending. The Stradivari workshop was undoubtedly the most prolific of the decade within Cremona.

While it is well known that the preceding decade of Stradivari’s work is often associated with some of the most beloved soloists’ instruments, there are several other periods that have produced tonally superior examples which have been highly sought after by the world’s great artists. The brief window of 1727 to 1728 from which the “Thunis” dates is one of those periods, with Stradivari producing violins that were to become the concert instruments of transcendent artists including Nicolò Paganini, Arthur Grumiaux, Zino Francescatti, and Leonidas Kavakos.

The “Thunis” is a bold and handsome example that has elicited astonishing praise from some of today’s most demanding soloists. For the discerning collector, the “Thunis” offers the opportunity to own one of the great masterworks of Antonio Stradivari’s final decade. We welcome your serious inquiry.