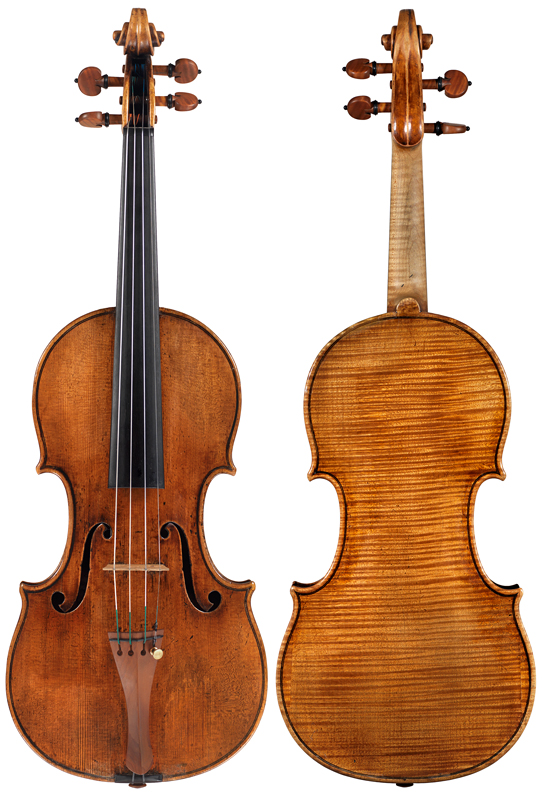 The “Falmouth” Stradivari is one of the most well-documented and celebrated instruments made on the great master’s long pattern. Stradivari began experimenting with an elongated form in the 1690s, breaking away from the traditional Amatise form and bringing about a new era in violin making. It was also during this time that Stradivari’s fame as a maker was solidified with the commission of a quartet of instruments from the illustrious Medici family of Florence.

Tonally, Stradivari’s long-pattern violins have their iconic rich, dark quality in the lower register with great brilliance and power in the higher register, characteristics all amply evident in the “Falmouth.” World-renowned virtuoso Leonidas Kavakos is a former Stradivari Society recipient who previously owned the “Falmouth” and commented in Strings Magazine, “I consider the long-pattern violin to be Stradivarius’ golden period … This one [the ‘Falmouth’] fits me because I think the dark quality in the sound accommodates different approaches in my playing. There is still something in the Stradivarius that is magical.”

Another long-pattern violin, the “Princess Polignac” of 1699, is the concert instrument of the internationally- acclaimed violinist Gil Shaham, who acquired the instrument from Bein & Fushi after it was initially loaned to him through The Stradivari Society.

Named after George Henry Boscawen, the second Earl of Falmouth (1811-1852), much of the known history of the “Falmouth” comes from the records of the legendary London firm of W.E. Hill & Sons, in this case from the notebook of John Betts stating that the violin was, “… bought off old Forster, M. Jatman Esq, General Boswelle, and Lord MacDonald,” before being acquired by Lord Falmouth. Other distinguished owners include Senator William Andrews Clark after 1880 and in 1887, the highly-esteemed American collector Dwight J. Partello. The “Falmouth” was illustrated in the December, 1987 issue of The Strad magazine. The violin was later sold by Bein & Fushi to its current owner who is a patron of the arts and has generously loaned the violin to the concertmaster of one of the foremost U.S. orchestras.

Violins of this caliber and provenance are rarely available. We welcome your serious inquiry.