This exceptional and rare Andrea Amati model by Pierre Pacherel has everything a violist could desire: comfortable dimensions, remarkable craftsmanship, marvelous golden- brown varnish in remarkably fresh condition, and a rich, resonant tone.

A French maker who had success in both France and Italy, Pacherel served his apprenticeship in Mirecourt. He then found employment in the workshops of Genoa and Turin, most notably in the shop of the master maker G. F. Pressenda. Their long association began in the 1820s. While Pacherel settled in Nice in 1837, where it is thought that he took over the atelier of another maker from Mirecourt, François Bastien, he frequently returned to Turin to assist Pressenda until about 1849, and the maker’s influence can be seen in Pacherel’s work.

The violist Mira Williams was loaned this instrument by our firm for the 2015 Sphinx Competition where she was awarded second place in the Junior Division:

“The tone of the Pacherel viola is just amazing with a beautiful ringing like church bells and a full, warm tone quality. It’s such a great match. Everyone at Bein & Fushi was incredibly supportive. I can’t thank them enough!”

This superb Pacherel viola is an ideal partner for all types of playing. 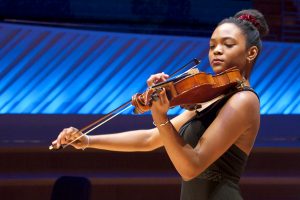