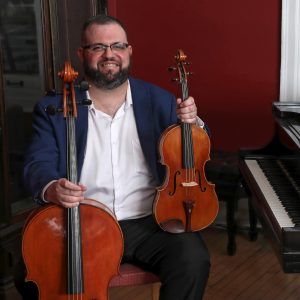 A Detroit native, Jesse Calcat has been working at Bein & Fushi since 2017.

Jesse is a multi-instrumentalist, having begun his college music studies focusing on piano and viola as an undergraduate. After beginning graduate studies in viola, Jesse realized that his true love in the string family was cello, to which he switched, and earned a Master’s of Music in Cello Performance from Bowling Green State University in 2015.

He has played in over two dozen orchestras in four different states, maintained a studio of violin, viola, cello, and piano students, and has also worked in piano accompanying and church music directing before coming to Bein & Fushi.

Jesse also plays several instruments outside of classical and the Western spheres, such as Celtic harp, guzheng, and erhu, and has performed on multiple instruments in two Celtic groups in his native Michigan.”